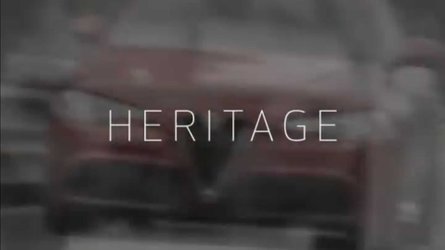 At the start of this year, reports of a hotter Giulia surfaced, which somehow gave us a breath of fresh air considering that Alfa Romeo has cancelled the revival of two iconic nameplates, the GTV and 8C. The company then denied the reports and told us that there were no plans to introduce a more powerful Giulia. Did we believe them? We’re not quite sure, but there’s now more reason to believe the previous reports.

In a recent post by Alfa Romeo on its official Facebook page, a teaser video showed a lookback into Alfa Romeo’s motorsport heritage. The 28-second clip that comes with the caption “Stay tuned.” had all the clues for us to confirm that the company is indeed bringing in a hotter version of the Giulia.

First, the clip showed the hotter Giulia in an action-packed run, reverberating its predecessor while doing so. There are words displayed on-screen, too.

“This is what the audacity essence is made of: Heritage. Power. Lightness. Adrenaline.”

All these catchphrases point us to one car, the Giulia GTA from the late ’60s. The lightweight sports coupe was celebrated for its lightweight body construction and power. The last part of the teaser clip above, which showed a triangular logo with the Latin phrase Audentes Fortuna Iuvat, also adds another reason to believe so. Of note, Autodelta, Alfa Romeo’s racing division, developed the Giulia GTA, which also bears a triangular logo. With Autodelta involved for the upcoming Alfa Romeo, it’s more likely that the brand is echoing what it has done back in the day with the Giulia GTA.

The final piece of the puzzle comes from another teaser from the brand:

The photo teaser came with a caption that says, “The pop rivets on the sides and on the fenders give the shell greater solidity and increase the car’s stability.”

To recall, the lightweight Giulia GTA came with outer aluminum body panels instead of steel, which were pop-riveted to the inner thin steel panels. With pop rivets being the main subject of the upcoming Alfa Romeo, the clues are undeniable but an official confirmation from the marque is still necessary.

Nevertheless, things would be clearer as days go by, and we sure do hope that Alfa Romeo is bringing back the Giulia GTA to sit atop the range as its most-powerful version.