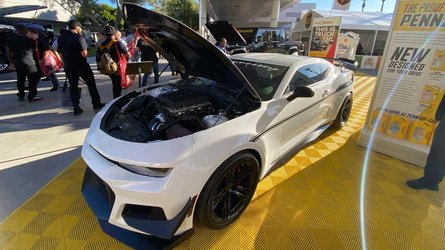 Las Vegas (November 5, 2019)—The Team from Hennessey Performance Engineering (HPE) has created the most powerful production series Chevy Camaro ZL1 1LE: THE HENNESSEY RESURRECTION, which will be unveiled on Tuesday, November 5 at 11:30 am at the 2019 SEMA Show in Las Vegas in the Shell Pioneering Performance Experience (booth 60003).

Following in the footsteps of THE EXORCIST, the company’s 1000 bhp ZL1 Camaro, Hennessey has now taken the ZL1 1LE to the next level. The heart of THE RESURRECTION begins by removing the ZL1’s 650 bhp supercharged LT4 engine and replacing it with the 755 bhp LT5 engine from the Corvette ZR1. The Hennessey Team then further tunes the LT5, running on Shell E85 biofuel, and increases power to 1200 bhp @ 6800 rpm!

Watch Its Roof Come Off