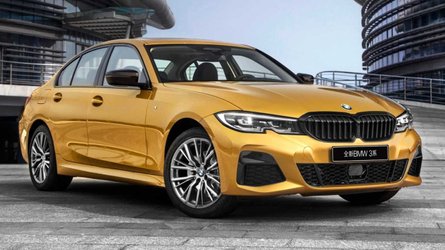 BMW Brilliance Automotive is also set to build the second generation of a model developed specially for customers in China – Production will be at the Tiexi/Shenyang plant – World premiere at the Auto Shanghai 2019 show, launch mid 2019.

Munich/Shenyang. Premium German carmaker BMW is presenting the second generation of a variant of its globally successful sports sedan developed exclusively for the Chinese market. The long-wheelbase version of the new BMW 3 Series Sedan will celebrate its world premiere at the Auto Shanghai 2019 show. Tailored specifically to the requirements of Chinese customers, it combines the new, elegantly sporty and emotionally rich design of the latest-generation BMW 3 Series Sedan with the most spacious and comfortable interior of any premium mid-size car, plus ground-breaking innovations in intelligent connectivity.

The long-wheelbase version of the new BMW 3 Series Sedan will be produced by BMW Brilliance Automotive (BBA) at its Tiexi plant in Shenyang, Liaoning Province (north-eastern China). The facility began operations in 2012 as the second production plant in the BMW Group / Brilliance China Automotive Holdings Ltd. joint venture. Among the models built here is the China-only variant of the new BMW 3 Series Sedan with standard wheelbase, which will likewise be unveiled for the first time at Auto Shanghai 2019.

The two body variants of the new sports sedan allow customers in China to plump for either extra dynamism or even greater comfort. Both model variants have all the ingredients to build on the successful history of the BMW 3 Series Sedan, which in China is headlined by an incredibly rapid growth in demand. Much of the credit here goes to the long-wheelbase version, which accounts for almost 80 per cent of 3 Series Sedan sales in China. All in all, around one in three new BMW 3 Series cars will be delivered to customers in China.

With this prognosis in mind and in keeping with the “production follows the market” principle, capacity at BMW Brilliance Automotive’s Tiexi plant has been ramped up once again. This demand-oriented production strategy is also contributing significantly to the burgeoning success of BMW models in other segments of the Chinese car market. Like the BMW 3 Series Sedan, the BMW 5 Series Sedan and BMW X1 are also offered in long-wheelbase versions developed specially for Chinese customers – and produced in Shenyang exclusively for the Chinese market.

The distinct character of the new BMW 3 Series Sedan in long-wheelbase guise stems from its extra 11 centimetres of wheelbase and the associated increase in seating comfort and legroom in the rear compartment. Its body design blends the new, extremely precise design language and sporting aura of the new BMW 3 Series Sedan with distinctive proportions. The new car improves significantly on its predecessor’s aerodynamics by virtue of finely judged optimisations. Encompassing an exterior length of 4,829 millimetres and a 2,961-millimetre wheelbase, the exterior dimensions of the new long-wheelbase BMW 3 Series Sedan outstrip those of any other car in its class. BMW’s hallmark sporting prowess is embodied here by short overhangs, a long bonnet and a set-back passenger compartment. The four-door model’s stretched silhouette underscores its inherent elegance and hints at the enviable spaciousness of the interior.

The powerful stature and sporty looks of the new long-wheelbase BMW 3 Series Sedan are accentuated by the 18-inch light-alloy wheels fitted as standard. The long-wheelbase version of the new BMW 3 Series Sedan features LED headlights with extended features. The trapezoidal tailpipe embellishers of the twin-pipe exhaust system add an eye-catching design flourish to the rear of the car.

The extended wheelbase and stretched flank lines of the new long-wheelbase BMW 3 Series Sedan are all about increasing spaciousness for rear-seat passengers. The rear doors are also 11 centimetres longer than those of the new BMW 3 Series Sedan with standard wheelbase, allowing particularly easy access to the rear seats. Add the special shaping and pampering upholstery of the rear seats to the mix and you have an outstanding level of rear-seat comfort over long journeys. The new long-wheelbase BMW 3 Series Sedan also offers an extra 43 millimetres of legroom in the rear compartment over the new BMW 3 Series Sedan with standard wheelbase, which sets a new benchmark in the class. The newly designed headrest, with their super-comfortable cushions, and the central armrest between the rear seats are likewise designed to provide a cosseting driving experience, while roomy map pockets are integrated into the front seat backrests. The design of the speaker covers has been developed specially for the Chinese market. In another model-specific feature, the ambient lighting also includes an illuminated contour strip on the back of the front seats. The luggage compartment of the new long-wheelbase BMW 3 Series Sedan can swallow 480 litres of gear, including as many as three golfbags.

The comfort-oriented character of the new long-wheelbase BMW 3 Series Sedan is also highlighted by a host of other model-specific equipment features. The panoramic glass roof, for example, ensures an effective supply of fresh air and a light, airy ambience for the interior. The attractive specification also includes a sports leather steering wheel with multifunction buttons and electroplated applications, and three-zone automatic climate control (with separate controls in the rear compartment and active carbon filters to optimise interior air quality). Like the rear-seat passengers, the driver and front passenger settle into comfort seats with Sensatec trim. Pronounced contouring, exclusive stitching and comfort headrest also help to make both the front and rear seats exceptionally pleasant places to be. Defining features of the driver-focused cockpit include instrument cluster/Control Display grouping and the modern design of the centre console, which houses the gearshift selector lever, Driving Experience Control switch, Controller for the iDrive control/operating system and button for the electromechanical parking brake. Two USB ports in the rear compartment and another under the centre console armrest between the front seats allow those on board to plug in digital devices.

The acoustic glass of the windscreen and optimisations to other body details ensure an extremely effective level of soundproofing for the interior. The ambient lighting includes the Welcome Light Carpet, which generates a striking light graphic where the driver and passengers get into and out of the car. Added to which, the new long-wheelbase BMW 3 Series Sedan comes with illuminated door sill plates for both the front and rear.

Developed in Munich, made in Shenyang: the four-cylinder engine with BMW TwinPower Turbo technology.

The engine teams up with an eight-speed Steptronic transmission to send its power to the road through the rear wheels.

The selection of driver assistance systems on board is significantly more extensive than on the predecessor model, and their innovative functionality helps pave the way for automated driving in the new long-wheelbase BMW 3 Series Sedan. Collision and Pedestrian Warning with City Braking function, Lane Departure Warning and Lane Change Warning, Rear Collision Prevention and Cross Traffic Alert are joined by Active Cruise Control with Stop & Go function. Driving Assistant Professional also contains other features – including the Steering and lane control assistant, which takes its lead from road markings and vehicles travelling ahead and keeps the new long-wheelbase BMW 3 Series Sedan safely on track in traffic jams and bottlenecks. At speeds of up to 60 km/h (37 mph) and under certain road conditions, the automated driving mode can be used for an unlimited time as long as the driver maintains concentration on the road. To this end, their line of vision is monitored permanently by a camera integrated into the cockpit. Another element of Driving Assistant Professional is the Emergency Stop Assistant.

The Parking Assistant, which gives the driver a helping hand with manoeuvring and parking, is included in the new long-wheelbase BMW 3 Series Sedan. It takes over steering, braking and acceleration duties when parking in spaces parallel with and perpendicular to the road and when manoeuvring out of parallel spaces. The system also features Active Park Distance Control, the Reversing Assist camera, the Lateral parking aid and the reversing assistant.

The modern, digital functions of the new BMW Operating System 7.0 – geared precisely to the needs of the driver – optimise intuitive operation in the new long-wheelbase BMW 3 Series Sedan. The system comes with BMW Live Cockpit Professional, which encompasses consistently designed, situation-linked and customisable screens for the fully-digital 12.3-inch instrument cluster and 10.25-inch Control Display. Touchscreen functionality for the Control Display, the iDrive Controller, steering wheel buttons, voice control and gesture control (optional) give the driver various operating methods from which to choose.

Another new arrival in the field of control/operation and intelligent connectivity is the BMW Intelligent Personal Assistant, an intelligent, digital character that responds to the prompt “Hey BMW” and is making its debut in a model offered for the Chinese market. One unique feature over other digital assistants is that drivers can give him a name. The arrival of the BMW Intelligent Personal Assistant ensures there is always a genuine BMW professional on board. He is able to explain all sorts of different functions (“How does the High Beam Assistant work?”), provide current status information (“Is the oil level okay?”) and help answer questions (“What warning messages do I have?”). The Intelligent Personal Assistant is, in short, the ideal co-driver and comes in particularly useful during everyday driving by responding to natural voice commands to help the driver with numerous tasks, such as enhancing productivity and on-board entertainment. The range of functions and skills available will be constantly expanded as part of regular updates, which can be carried out seamlessly on a smartphone and in-car by Remote Software Upgrade.

The long-wheelbase version of the new BMW 3 Series Sedan will only be available in China.

Audi AI:ME Unveiled As Rear-Wheel-Drive EV For The City

Sporty wagon coming but not to US