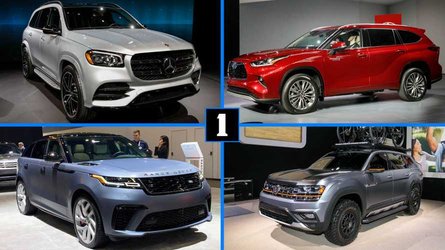 New York City is a pretty darn neat place to live. It’s also a hilariously expensive one. Even a one-bedroom shoebox of an apartment can reach exorbitant prices, so getting good value for money simply isn’t a thing that’s going to happen when shopping for an apartment in the Big Apple.

But the 2019 New York Auto Show, dominated by crossovers as it was, gave us an idea. See, what if instead of investing your life’s savings on a fourth-floor-walkup studio in a seedy area, you took that big chunk of change and bought a car. Specifically, what cars are a better value than the typically overpriced apartment in the Big Apple? Well, most of them.

There are no shortage of options, from big to small and affordable to ultra-expensive. With luxury barges from Land Rover, Lincoln, and Mercedes-Benz, high-performance variants from Alfa Romeo, and mainstream entries Toyota, Subaru, and Hyundai, New York was a show that was big on being big. And that means a lot of choice for apartment-averse New Yorkers.

Fortunately, the Motor1.com team is here to narrow the choices down. Rather than spending crazy money on an apartment, why not spend it on one of the rides we feature here. Yes, we recognize that buying a car instead of an apartment is not exactly reasonable, or responsible, or even all that smart. But, if space is your top priority, you could do a lot worse than the five vehicles we feature here.

They cover the bases for performance, luxury, style, comfort, versatility, and spaciousness. Some of them are designed to go off-road while a certain one – you’ll know which – can go very, very fast. And compared to the typical apartment here in the Big Apple, they’re all (arguably) a far better value. Check out the video for the full rundown.

Low tire pressure can be dangerous