Dodge may be bringing back the Hornet name for a new North American model. The news comes by way of Motor Trend, which uncovered trademark filings by Dodge and reported on them on Wednesday. The name was last used on a 2006 concept car and prior to that it appeared on a 1970s AMC compact car.

Dodge parent Fiat Chrysler Automobiles (FCA) filed trademark applications for the “Dodge Hornet” and “Hornet” names with the United States Patent and Trademark Office on March 3. FCA also filed to trademark those names in Canada and Mexico, according to Motor Trend.

The filings don’t give any indication of what kind of vehicle the Hornet might be, and a Dodge spokeswoman had no comment when Motor Authority asked about the trademark filings. The Hornet name originated in 1951 with Hudson, which later became part of AMC. Then, in 1987, the name became the property of Chrysler when it absorbed AMC.

The 2006 Dodge Hornet concept car was a tall-roofed small hatchback not unlike the current Kia Soul, Hyundai Venue, and Nissan Kicks. A model like that could make sense for Dodge today, especially if, like Kia, Hyundai, and Nissan, Dodge markets it as a crossover rather than a hatchback. 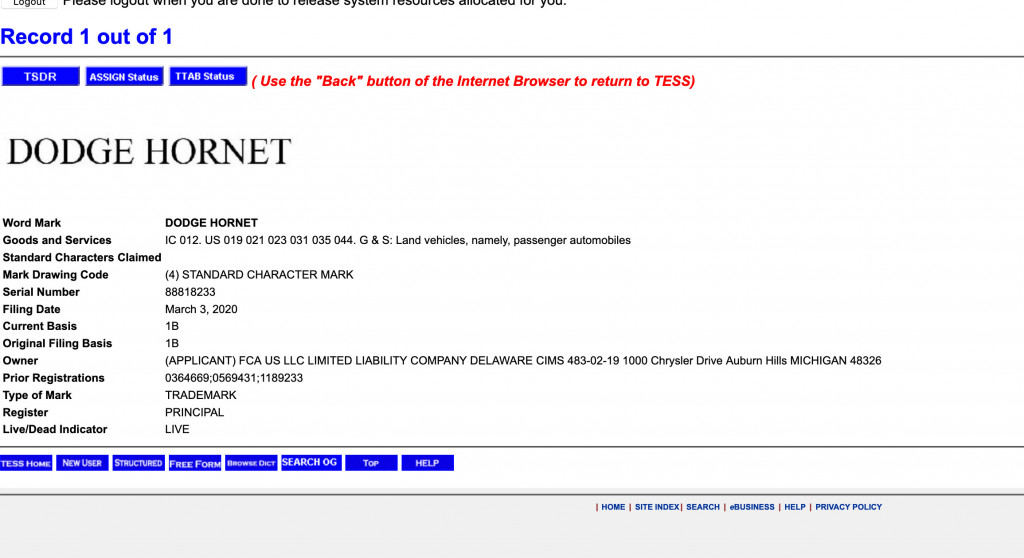 Dodge was thought to be developing a production version of the Hornet around 2008, but it was later confirmed that the Hornet name had been shelved.

Dodge certainly has room in its lineup for a new model. The recent demise of the Grand Caravan will make the Challenger, Charger, Durango, and Journey the brand’s only models. The aging Journey likely isn’t long for this world, either.

FCA’s recent merger with France’s PSA Group gives Dodge access to more small-car platforms. But that was also supposed to be one of the benefits of the Fiat merger, and it didn’t help Dodge. The automaker only got the Dart sedan, which was quickly withdrawn from the market due to poor sales.